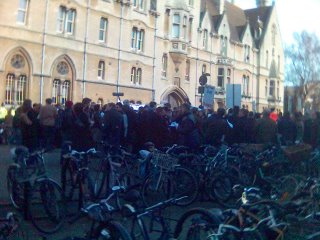 11.30am, Broad Street: and there's a pro-test in progress. News and media reporters abound too - note the boom mic 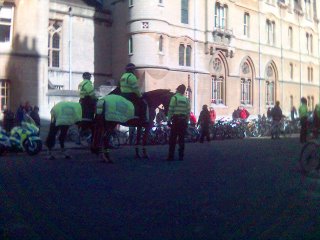 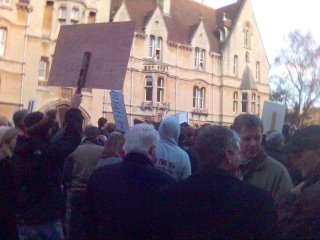 Young and old - from students waving placards to gentlemen in suits, the Pro-Test drew the crowds 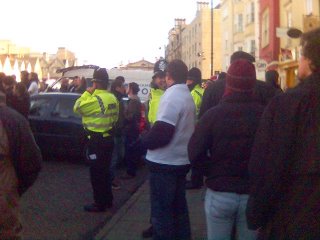 Note to SPEAK: This is what co-operation with police means... you might like to try it sometime. 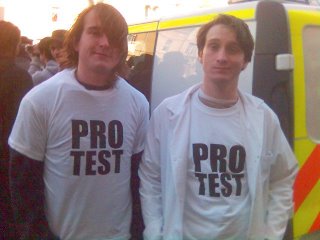 What a pun it turned out to be... my throwaway gag becomes immortalised on T-shirts

Posted by James Muscat at 7:49:00 pm No comments: Links to this post

The ongoing ChoicesUK at War saga continues to be ongoing... In fact, their latest estimate is the 6th March. Did they politely E-mail me to tell me this? No. I phoned them up. Thankfully, there were no automated phone systems to contend with; in fact, the support department at ChoicesUK are brilliant, some of the best I've encountered. It's a shame the stock control department don't match them. So, "problems with the distributer for all the games" mean I have to wait...

THE 6TH OF MARCH! I'll almost be leaving Oxford by then! So here's what I'll do: I'm cancelling my order with ChoicesUK. I'm ordering instead from CD WOW!, who have been reliable in the past. It's a few quid more expensive, but at least I'll get it while I'm still at the delivery address.
Posted by James Muscat at 3:45:00 pm No comments: Links to this post

As promised, an extract from an earlier conversation on IM. Edited slightly to keep it on-topic. Pay close attention to the timestamps: yes, this conversation really did last that long.

It's a political, tactical, "sexually frustrated" (as the Kretch put it) time of the year... the JCR Room Ballot is concluding this evening with the Remainder Ballot - that is, anyone who's not a finalist or in a house.

Well, a brief check suggests I will indeed have a mobile phone signal there; whether or not I'll get a DTT signal is undecided. I can always rig up a MythTV backend somewhere high up, if a friend has a higher room... try doing that with your Media "Center" PC without getting a headache or a nasty letter from your bank manager. It's ground floor, which should stop Mum complaining about having to climb lots of stairs.

More later, including an interesting conversation about HAZOP... wait and see...
Posted by James Muscat at 6:48:00 pm No comments: Links to this post

Well, last time I made an "end of 5th Week" post, it all went downhill from that point... not taking chances here, though so far 5th Week Blues haven't arrived.

Speaking of things that haven't arrived: am I happy with www.ChoicesUK.com? No. No, I am not. On the 21st January (that's nearly a month ago) I pre-ordered a copy of the excellent-looking Star Wars: Empire At War PC game, which was released yesterday in Europe (Thursday in the States).

Now, a bit of back story: originally, ChoicesUK has the release date as the 10th February. No idea where they got this from, everywhere else in the known universe was correctly giving the 17th as the right date. So, lo and behold, on the 10th I receive an E-mail telling me that "due to circumstances beyond our control, the despatch of this product has been delayed." Fair enough, though they don't tell me when they expect it to be dispatched.

ChoicesUK's pre-release policy says that "when you pre-order a title that has not yet been released we aim to deliver it to you on the release date." Which would be the 17th, right? Uh... no.

Seeing that my order had not been processed by mid-afternoon, I sent an E-mail enquiring as to when I might expect to receive the game. Credit where credit is due, the response was extremely quick (in fact, only three minutes!); but not the one I wanted. In fact, I learn that " The product is currently delayed until the 23rd of February." Why? They didn't say. Later that day, I received yet another generic "this product has been delayed" E-mail.

So, I wait for Thursday to arrive... and hope it doesn't get stolen by Rebel spies while in transit...

A scary moment earlier today when I used my last teabag. A quick trip to Sainsbury's relieved the tension, and I have a cup of tea on my desk right now. (Since I was ill during 4th Week, my tea consumption has been cut dramatically... time to make amends.

This last teabag was used to prepare a cup of tea for my mum, who came to visit with my sister today. Catherine seemed to be more impressed with the internet connection than with the architectural jewels of the City of Dreaming Spires. I have taught her well.

No tutorials in 6th Week; my tutor is away in Germany. Gives me a chance to catch up on the work I had hoped to catch up on during the equally tutorial-free 4th Week, which I was unable to do thanks to the "hyperflu" that Andy, fellow CompSci-in-crime, seems to now be suffering from.

A Love Poem for Valentine's Day

Your linear transformations are to me
As flower petals on the vector space tree
Your kernel surely must be small
As with your rank you best them all
Posted by James Muscat at 4:45:00 pm No comments: Links to this post

Not the most gripping of post titles, I admit, but for those who have been trying it's good news...

I finally got my Palm syncing with KPilot via my IrDA dongle. I'm fairly certain that the USB connection is iffy, though it's only HotSync that fails with USB, and other software works fine over the connection. Oh well, I've had it too long for it to still be under warranty. IrDA is slower, but it still works!

OK, so here's the setup: I have a SigmaTel USB IrDA dongle. This makes it a tad more involved than with a serial one. First, a few modprobes (as root, of course): irda-usb, ircomm, and ircomm-tty need to be loaded. Then an irattach irda0 -s connects everything up. Telling Kpilot to listen to /dev/ircomm0 then allows the Palm to sync!

It sounds so simple, and I've tried so many things so close to this before. I actually found out by trying to find some software that would let me download stored SMS messages from my phone, and trying that via ircomm0. It worked. I thought, "Hmm. That hasn't happened before" and the connection was made!

This week I also got a nice shiny new leather case for my Palm, as the original flip cover has split quite badly. It's lasted ages, to be fair! So now my PDA has a leather jacket. It opens the "wrong" way (with the PDA on the left and the flap on the right), though this does give somewhere to rest my hand while I use the stylus.

So I guess you could say it's been a pretty PDA-centred week. It wouldn't entirely be true - if anything, it's been illness-centred and hopefully Christ-centred, being mission week - but you could say it nonetheless...
Posted by James Muscat at 3:59:00 pm No comments: Links to this post

Friday, 3rd Week: The power of (a play on) words

See the subtle difference there?

OK, some background. You may have heard about the new medical research lab being built in Oxford (actually, just a stone's throw away from where I am now). Animal rights groups, ALF and SPEAK (whom I deliberately group seperately) have been organising regular protests against its construction. The Cherwell has several reports on the nature of the protests; in addition to these legal protests, several Oxford colleges have had their boathouses burnt down; and recently Oxford Architects suffered several acts of vandalism at the hands of the ALF.

A recent ALF statement read: "This is just the beginning of our campaign of devastation against anyone linked in any way to Oxford University. Every individual and business that works for the University as a whole is now a major target of the ALF. We must stand up, do whatever it takes and blow these f****** monsters off the face of the planet." (My asterisks).

Oxford students are, to tell the truth, not impressed, and certainly not intimidated. On a recent trip to Oxford, the boyfriend of an Oxford student decided to take a stand. Read his blog post here. One of the comments in reply to this post was from myself - and in it, I happen to make the pun as detailed above. I wasn't quite expecting for it to become the name of a new, pro-lab protest movement, Pro-Test!

SPEAK are seemingly worried: in response to the formation Pro-Test they published an article that, rather than addressing the issues on the table, decided to instead launch a personal attack on Pro-Test's founder. I'm not going to dignify it with a link from here.

The first Pro-Test Protest is scheduled for the 25th February.

In other news: I want to program using this language.
Posted by James Muscat at 7:08:00 pm No comments: Links to this post