A couple of weeks ago, Peter T and I took various tools to Martyn Layzell's Mac G3. The laptop was officially certified dead before Martyn could get anything from his hard drive, so it went to the resident St. Aldate's geeks to see what we could find. 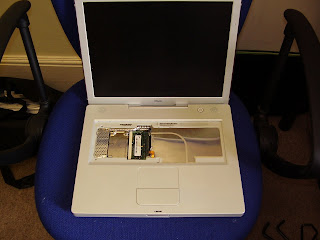 When I got there (carrying essential caffeine supplies), the keyboard had already been taken out, and we started work on the outer bottom shell casing... Or, we tried to, but none of the allen keys in St. Aldate's were the right size. Peter had a flash of inspiration: maybe it was using American sizing? A dash to Robert Dyas, and the laying on of hands by our worship pastor (j/k), and a jolly good prising with a screwdriver and the casing came away at last. 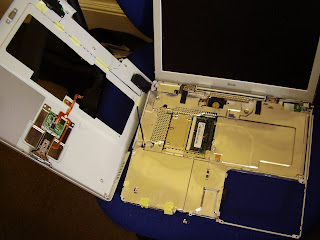 This had taken so long that I had to leave for a class at this point (Programming Languages), but I left Peter and Martyn with my camera to photograph the end result... 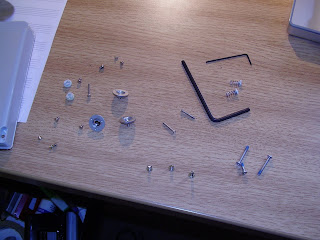 A ridiculous number of fixings... 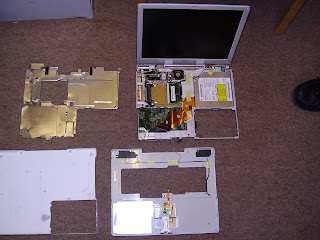 And lo, a MacBook with hard drive removed!
Posted by James Muscat at 5:30:00 pm No comments: Links to this post

The Prime Minister of the United Kingdom of Great Britain and Northern Ireland, the Right Honourable Anthony Blair MP, has responded to an online petition to ban the use of digital restrictions management (DRM) for digital content (read it here).

In a complete and total misunderstanding of what DRM is, what it does, and why it is used, the response reads:

"...However, DRM does not only act as a policeman through technical protection measures, it also enables content companies to offer the consumer unprecedented choice in terms of how they consume content, and the corresponding price they wish to pay."

This is actually genuinely part of my OOP practical. (Note: contains spoilers for the game!)
A long time ago, in a galaxy far, far away...
You are on the bridge of the Imperator-II class Star Destroyer Chimaera. Through the transparisteel windows you see a vast starfield.
There is a turbolift at the rear of the bridge

What now? go corridor
You are in a harshly-lit corridor near the belly of the Star Destroyer
A blastdoor leads out into the main hangar
Close to you, a door leads to another room
At the end of the corridor is a turbolift

What now? go blastdoor
You are in the main hangar of the starship. Beyond the magcon field lies the coldness of space
The blastdoor leads back into the corridor
An Imperial Shuttle is landed in the hangar

What now? go shuttle
There's no way to lower the ramp without the keycard.

... and that's all you're getting! I should point out that I haven't just played the game for the practical - but actually written it. (My first ideas, to extend the template we were given to read in XML-described levels, was discarded as being too advanced for the course.) There's an unexpected plot twist (well, such that there is any plot) later on in the game - I'll probably make the Java bytecode available somewhere at some point (but obviously not the source code, since some of that isn't mine and I don't want people to copy it before it's marked!)
Posted by James Muscat at 4:21:00 pm No comments: Links to this post